Led by Messi's brilliance, Barcelona extend their unbeaten streak and consolidate on the top of the league

When at around 2 pm the Getafe CF bus took the Madrid Avenue in Barcelona parallel to the Travessera Les Corts and the Camp Nou, it did it with the same loneliness the team would show a couple of hours later in the Blaugrana pitch. Only one point in the last eight matches and several absentees didn’t encourage optimism. One ball touch inside the culé area made Getafe in the first 45 minutes and just in a quarter hour the team from Madrid got no reply against Leo Messi.

Even when doesn’t seem like it, everything that happens through Messi has a purpose. Perhaps he does fail an extra penalty or two along the way but the dominance the Argentinian rules over matches like yesterday overrides any objections. Messi enabled, always in a decisive manner, four out of the first five goals, he smashed in another one and created an endless stream of chances impossible to stop for the rival. As it’s well known, the numbers, not even the ones apparently significant like goals or assists, are not enough to define the magnitude of such footballer. There are passes which seem irrelevant but instead trigger the whole machinery. Active from start to finish, in the first 20 minutes Messi had already enabled Jordi Alba to gain the goal line and transform the subsequent cross in a deficient rejection by Juan Rodríguez for the own goal and then he placed the ball for Munir’s header for the 2-0. The exceeding force in that pass was the one Messi lacked in the penalty kick saved by Guaita but no one in the Camp Nou reproached him anything. How could they do that?

With Sergi Roberto playing freely in the midfield, knowing what to do and how to execute it even though he plays in that position once every two months, it seemed that Escribá wanted them to focus their efforts in stopping the Barcelona’s strikers as if the midfielder’s game wasn’t influential on what happens in the goal areas. He acknowledged this after the game in the press conference. It looked like a bad idea, precisely the day Luis Suárez rested and Barça scored for the first time two goals without any involvement from the trident members. Iniesta, who was refreshed for his condition of being the starter with less played minutes, also contributed to the immense local superiority.

Meanwhile, Neymar Jr. didn’t want to leave either any room for doubts after his convenient fifth yellow card and his trip to Brazil. Brisk from the kickoff, he maintained the chemistry with his usual partners of the left flank (Alba and Iniesta) and he also overcame his most recent struggles while finishing facing the goal. He left the ornaments outside the area and by the 30th minute he took advantage of a new pass from Messi to nailed in the 3-0 with a crossed shot. Actually, the whole team pretended to drive the game to the right band just to quickly finish the plays on the opposite side whether with individual attempts or with Leo’s passes. 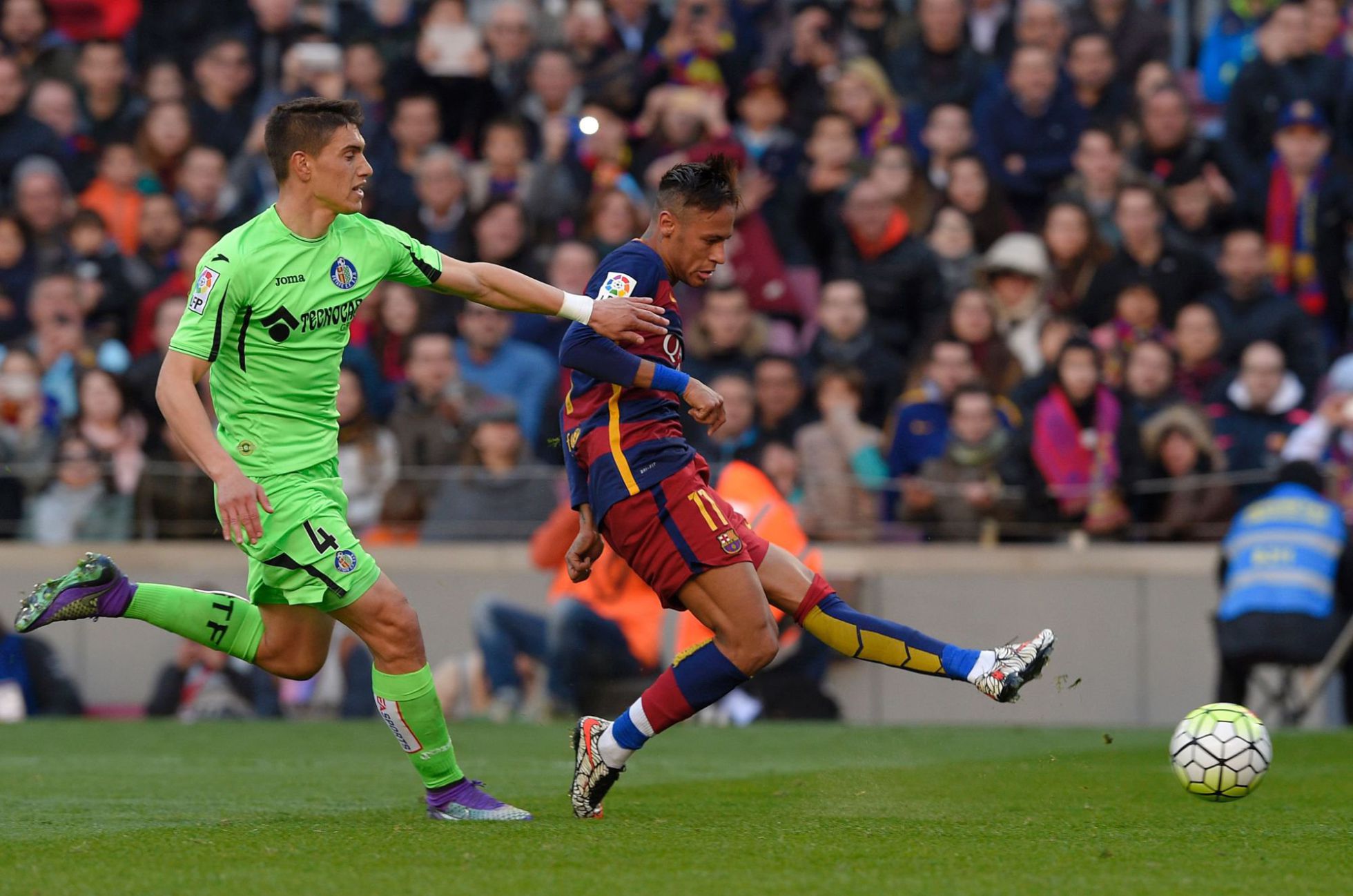 Messi wanted to compensate for his missed penalty and he celebrated his goal on the verge of halftime. He received on the edge of the area, turned before Juan Rodríguez and sent a curled unstoppable shot towards Guaita. The bowing before the genius continued and the tourists and children that maybe were in the Camp Nou for the first time could witness that everything they have heard about Leo was true and that probably it didn’t do him enough justice.

The second half carried on like the first one. Messi found Neymar between Getafe’s centre-backs and the Brazilian finished it in a subtle manner for the 5-0 and a rather unorthodox bicycle kick from Arda Turan for the sixth goal. The Turk’s match still leaves you wondering how his game style fitted in Simeone’s Atlético. Or phrased in other words, if he is capable of playing as a midfielder in Barça against tougher opponents considering his current rhythm, even with the couple of technical luxuries he provides in each game.

Samper benefited from Busquets’ rest and he debuted in La Liga with half hour of game time. Here’s hoping he could be a leading actor when the new stadium is ready in the next lustrum. For now, Barcelona have 12 consecutive wins in the league and a 37 unbeaten games streak when Arsenal, Villareal, Real Madrid and probably the Champions League’s last-eight round are on the horizon. This is the time of the season in which the squad has showed its best performances in recent years. Do not leave your seats, there’s still much to come.

Article translated from Spanish to English, originally published at the Perarnau Magazine by Daniel Cana.

Jaime is a chemical engineer from Venezuela who is passionate about football and Barça. He loves the club’s history and he has been an unconditional fan since Ronaldo “The Phenomenon” amazed the world with the Blaugrana colors.