It is somewhat ironic that a football tournament called “The King’s Cup” -- recognizing Madrid as the central axis of power -- has been historically dominated by teams from two of Spain’s autonomous communities. And not just any regions: the added flavor of Catalonia’s and the Basque Country’s independence aspirations spice up the irony to a mouth-watering combo.

Let’s recap the events and stories of these clashes between Culés and Los Leones (The Lions).

The 1920 final was played at El Molinón (The Big Mill) stadium in Gijón, on a waterlogged pitch and the stands were filled mainly with Basque supporters. The main talking point in the match came when the referee Bertrán de Lis, the National Referees Association president at the time and a highly esteemed official among Catalans and Basques, awarded a clear penalty in Bilbao’s favor. Athletic striker, José María Laca, scored the penalty but de Lis ruled it out due to penalty area encroachment by Germán Echevarría.

An even bigger surprise came when the referee decided that the penalty wasn't going to be retaken, as the rule book stated, but declared a foul against Bilbao. The decision caused outrage among the Basques and resulted in a huge scandal in the days that followed. Barça ended up scoring in the second half, through Vicente Martínez and Paulino Alcántara and won the match 2-0. After the game, de Lis acknowledged his mistake and retired from refereeing.

The 1932 Spanish Cup final was played at the Chamartín stadium in Madrid. Up until this point, Barcelona and Athletic had been dominant in this tournament, with eight and eleven titles respectively. Bilbao was the favorite with a fearsome group of strikers formed by Chirri II, Lafuente, Iraragorri, Bata and Gorostiza, known as the “First Historic Attacking Line.” On Barça’s side, a 30-year-old Josep Samitier was entering his twilight years with the club and was the only player remaining from the aforementioned 1920 final.

Despite being the underdogs, Barcelona took control of the match and had a great chance to take the lead with a penalty kick in the 34th minute. However, Ramón Zabalo missed the penalty, sending it narrowly wide near the top corner. In the 55th minute, a cross by Lafuente was finished off with a strong header by Bata and that sealed the Blaugranas’ fate. Athletic Club achieved its third Spanish Cup in a row and its 12th overall title.

1942 - The first clash for the “Generalissimo Cup” 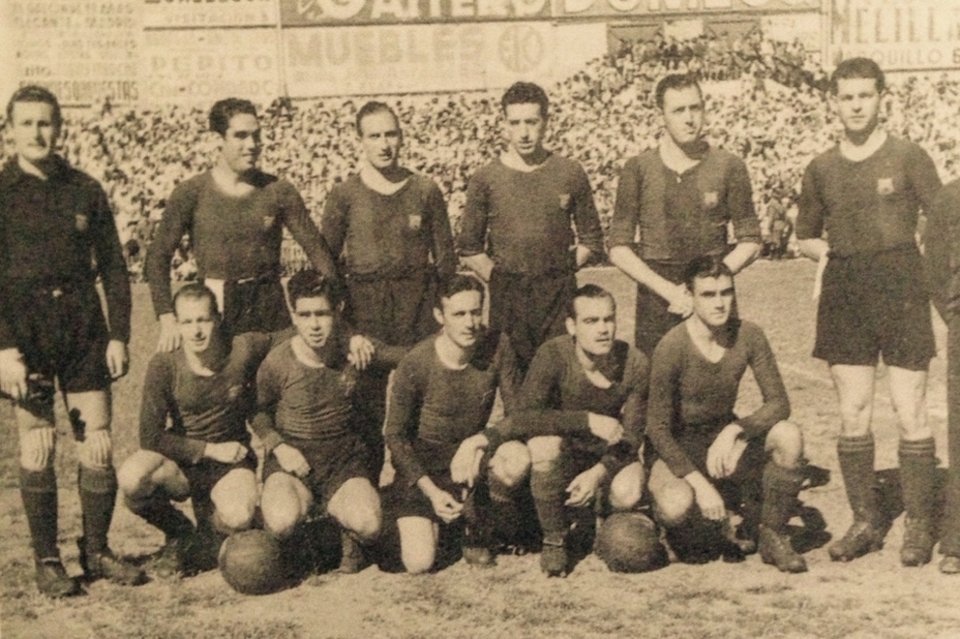 The 1942 final was the first between Catalans and Basques during the Francisco Franco regime and the first one the Spanish dictator witnessed directly from the Chamartín grandstands. Franco arrived five minutes after kickoff and the match was stopped at once when the audience chanted his name. Only after he gave his consent the match resumed.

Athletic Bilbao was not the same spectacular squad of previous seasons but had a young footballer named Telmo Zarra in its ranks. On the other hand, with many of its former players in exile after the Spanish Civil War, Barcelona was struggling and was facing relegation in the league, therefore a potential cup title was an almost impossible feat.

Barça was winning comfortably 3-1 with 10 minutes to go, with a brace by Josep Escolà and a goal by Mariano Martín. However, Athletic managed to equalize in impressive fashion with Elices’ second goal and one by Zarra, in the space of just two minutes. The match went to extra time and was resolved in the 101st minute with Martín’s second goal, who got injured in the build-up after clashing with Athletic’s goalie.

Franco himself handed over the trophy to Barcelona captain, Josep Raich, awarding Barça with their ninth Spanish Cup title. Just a week later, on that same pitch, the Blaugranas battled against Murcia to avoid relegation. A good culé knows what happened that day.

This time around Barcelona had the upper hand with a fantastic squad dubbed “The Barça of the Five Cups,” so named because they had won the league, the Spanish Cup, the Latin Cup, the Eva Duarte Cup and the Martini & Rossi Cup the previous season. The Blaugranas were led by a László Kubala in his prime, supported by Ramallets, Seguer, Basora, Moreno, Manchón and the rest of his entourage.

The match was played at the Chamartín stadium in Madrid, the usual venue at the time. Kubala was the best player on the park, taking the game by the scruff of the neck despite being fouled time and again by the Basque players. He scored the match's first goal in the 46th minute after an abysmal error by Serafín Areta whose poor clearance ended up at Manchón’s feet, who in turn assisted the Hungarian for an easy goal. Eleven minutes later, Kubala tried a powerful shot which Bilbao’s goalkeeper, Carmelo Cedrún, could barely deflect, leaving Manchón all alone to score the Catalans’ second goal.

Athletic recovered partially after a headed goal by Venancio in the 61st minute and pushed for the draw vigorously, but Ramallets pulled off an array of superb saves. In the last few minutes, Kubala performed one of his well-known ball controls, not letting any of the opponents touch the ball, an action that prompted Bilbao’s president to say afterwards: “[Football] is not really a sport to not play and to not allow the others to play.”

With the final whistle Barcelona conquered its third Spanish Cup title in a row and the 14th overall. 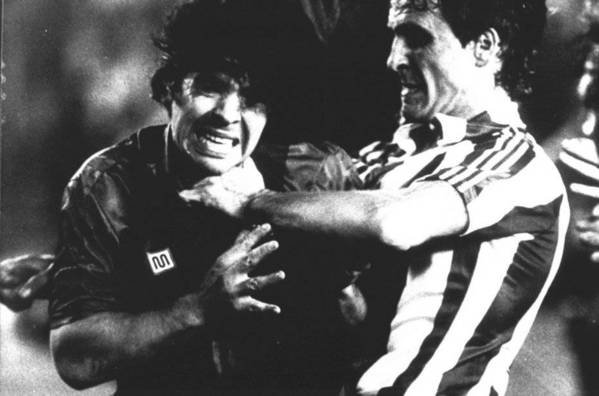 This was not a Foreman vs. Ali brawl but it was close. It was not a random incident either: the match was already charged with both sides making snide comments days before and with the fact that Bernd Schuster and Diego Maradona had been injured by Andoni Goikoetxea in the previous seasons, both needing surgery and long spells on the sidelines.

The match took place at the Santiago Bernabéu stadium and there was very little football on show from either side. The only goal came in the 14th minute when a poorly defended corner by the Blaugranas allowed Endika to control the ball with his chest and smash it to the net with a left-footed effort. Barça could not equalize and with the final whistle came the scuffle known as “The Bernabéu Battle.”

The tension continued in the press conference room as Javier Clemente, the Basques’ coach, stated: “They were sore losers. We have to stop recruiting these outsiders who come here with no education.” With the win Athletic Bilbao achieved the 1984 domestic double and its 23rd Spanish Cup title, the last one to date.

In an historic season that ended with a treble and with a record of six titles in a year, the 2009 Spanish Cup final was the first stone that paved such wonderful path.

Barcelona was on the verge of the La Liga title, which it achieved only three days after the Spanish Cup final in Mestalla, and had already secured its spot in the Champions League final with the “Iniestazo” at Stamford Bridge.

The Basques started the match off with high intensity, smothering the Blaugrana game flow in defense and midfield. This initial pressure paid off in the ninth minute when, from a corner from the right side, Gaizka Toquero rose up over Xavi and Keita, nailing the header through the top left corner.

Little by little the Pep Team got control of the game with Xavi’s leadership joined by the link-up between Messi and Alves. But the goal arrived in an unexpected yet spectacular fashion: Yaya Touré received the ball behind the halfway line, impressively dribbling past three Bilbao players and beat Iraizoz with a low, powerful shot.

From then on began the Blaugrana recital: An Iraizoz save fell kindly for Messi in the penalty area and he fired in a left-footed missile to take the lead in the 54th minute. Three minutes later a lightning fast counter was finished cold-bloodedly by Bojan to make it 3-1. The culés’ ecstasy hit in the 64th minute, when Xavi scored a superb free kick through Iraizoz’s top right corner.

It was FC Barcelona’s 25th Spanish Cup title and the first one in the marvelous Guardiola era. 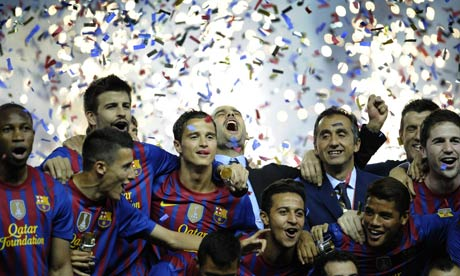 Football is life’s best metaphor, the old saying goes. The game, like life itself, has its symbolisms and its ironies. The 2012 Spanish Cup final was the summit of an era, the farewell of a mesmerizing cycle. The Perfect Circle round up. Against the same rival in the same competition, the first Pep Team wrote the last page of the most astonishing chapter the football world has ever heard of: winning 14 of 19 possible titles in four years.

We will tell our grandkids bedtime stories about them and they won’t be able to sleep, in disbelief.

Jaime is a chemical engineer from Venezuela who is passionate about football and Barça. He loves the club’s history and he has been an unconditional fan since Ronaldo “The Phenomenon” amazed the world with the Blaugrana colors.