There is no doubt that Arda Turan was one of the most important players in the historical Atlético Madrid side that won La Liga at the Camp Nou and nearly took home the Champions League in the 2013/2014 season.

Arda first shined at Euro 2008, where he, alongside the likes of Nihat Kahveci and Semih Şentürk, led Fatih Terim's side to the semifinals before losing to Germany 3-2 on stoppage time.

That tournament was the real debut of Arda's career, showing great skills and pace down the left wing. From 2008 on, Arda has evolved, he gained physical strength, improved his tactical awareness, which led to better play-making abilities, that being the main reason why he was one of the most important players for Diego Simeone, accompanied by his privileged dribbling. The Turk, thanks to his talent, huge determination and hard-work was one of La Liga’s stars since he arrived in Spain.

Arda Turan's addition is meant to give more depth to Luis Enrique's squad and bring more competition, especially for an aging Andrés Iniesta similarly to what happened to Xavi when Rakitic was signed. Although their main characteristics are different, the Croatian soon turned into a starter and Xavi into an essential backup player, the Catalan maestro later told “El País”: “My body tells me I don't have much football left.”, which arguably points to the level of competition Rakitic's addition had brought.

After Xavi's departure, Barça had two main options: look for a straight replacement for the Catalan legend or look for something else - something that the team now lacked and needed to improve. Looking for a straight replacement for a footballer like Xavi seemed an impossible mission. The likes of Gundogan or Verratti are still there in the world of football, and they're, at least style-wise, similar to Xavi, but with the concerns about Gundogan’s fitness following his lengthy absence, and PSG not negotiating for Verratti, it became difficult to see Barça getting a proven replacement for Xavi. Barcelona decided to do, with an specific request from their coach, Luis Enrique, was to seek a different addition in the middle of the park, going for a more vertical approach. Arda offers a continuous playmaking threat and continuously pushes himself on defensive duties. 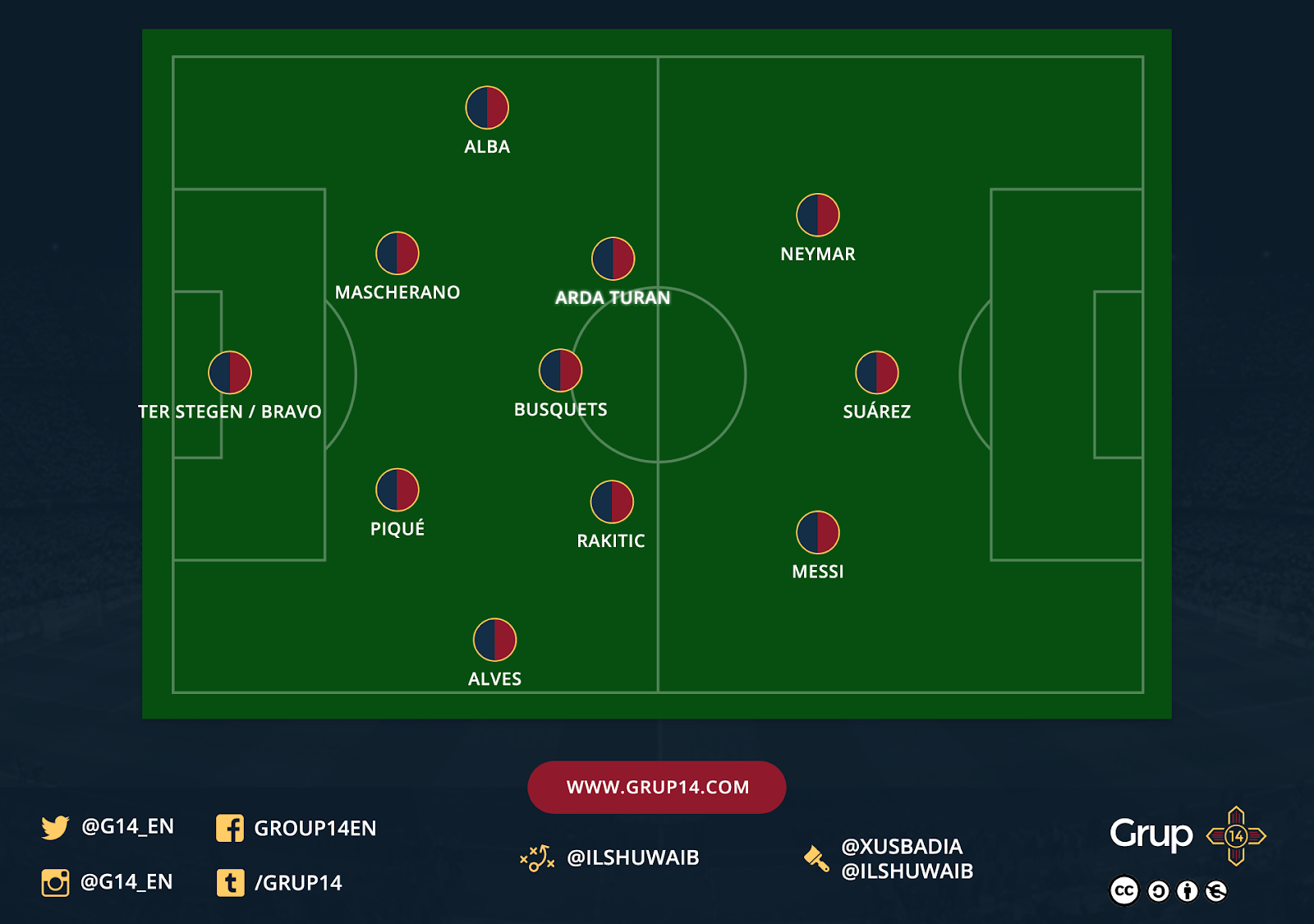 Barça’s regular XI with Arda playing as a LCM/Interior on the left.

Turan would give Luis Enrique a chance to rotate Andrés Iniesta. The magician who is now 31 years old needs to be rested at some stages of the tiring season Barça will walk through. His talent, creativity and physicality are not the only reasons why Barça have chosen to sign Turan, he also has the ferocity and winning spirit that are hugely important for a team like Barça after a season in which they won an historic treble for the second time in their history. Arda will only start playing in January when the team might have completed the sextuple again, so they need the kind of player who can maintain the hunger for victories.

In any football match, the coach will need to either make a defensive change or an offensive one, depending on what he thinks and what qualities he thinks he has to add, Arda would provide those two options if he can be brought on from the bench: 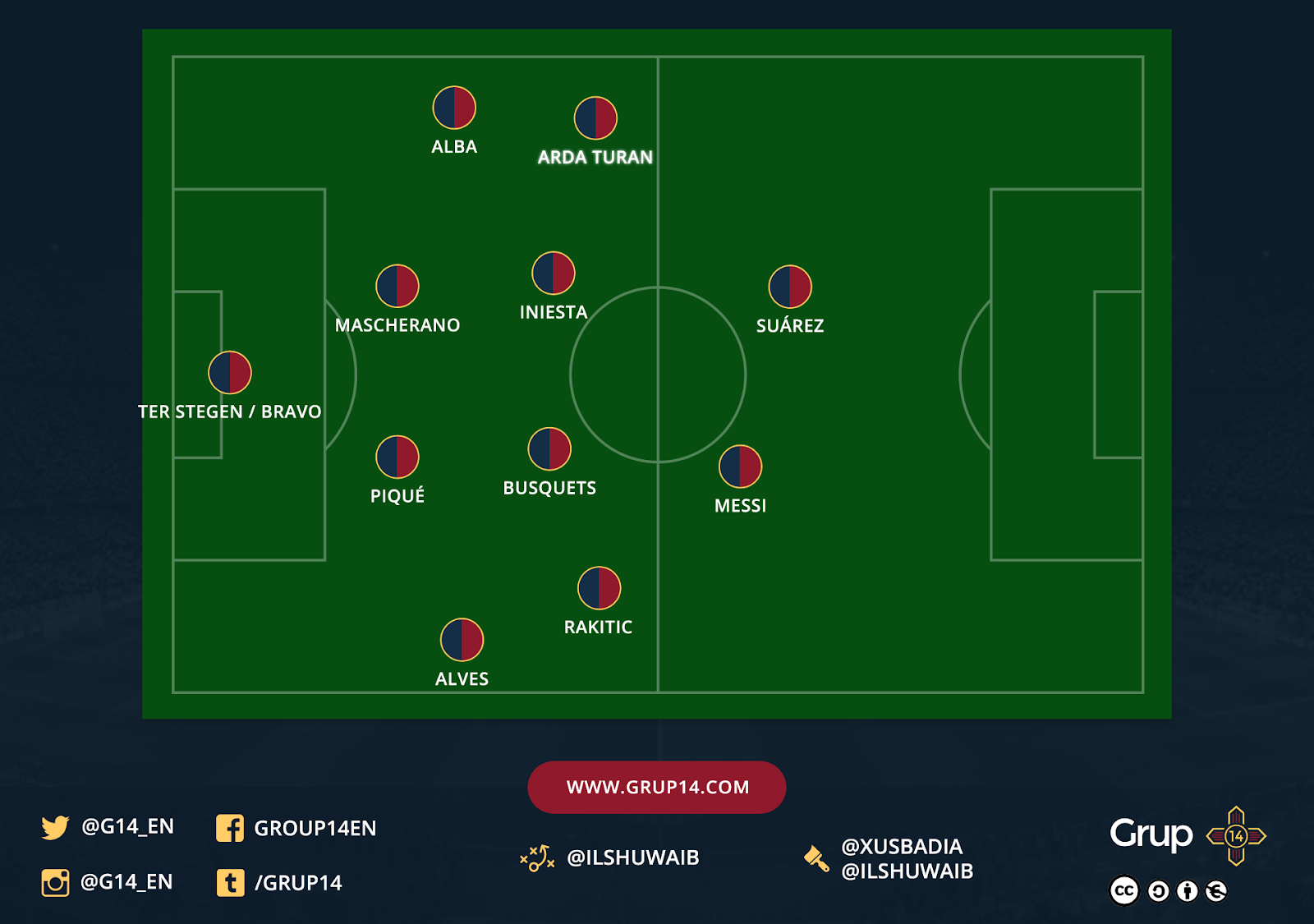 Lucho wants to keep things tight at the back, Arda subbed on for Neymar.

Arda could be subbed on if Lucho wants to give his team more compactness and solidity, similarly to what happened from time to time last season. Arda can replace a forward (Neymar) and play on the left as a left-sided midfielder in a 4-4-1-1 or 4-4-2, similar to what happened in the last 2-1 Clásico win at the Camp Nou last season, when Rafinha Alcântara came for Neymar in the last five minutes of the game. It's worth mentioning that Arda is more than familiar with these types of situations, having played for Cholo Simeone who is a master when it comes to making his starting XI compact A probable Barça attacking situation against a 4-4-2 side.

He could also be an offensive solution, coming on for Iniesta in the regular 4-3-3, a more direct approach and a bit of unpredictability.

Generally, Arda would play for Barça as many expect as a left interior. When playing next to a versatile midfielder like Ivan Rakitic, it’s expected to see him with a bit more of an attacking role, supporting the attack and searching for the final pass, beating the opponents’ congested defense using his dribbling ability.

Luis Enrique wants someone who can be Rakitic’s mirror on the left side of the field without the ball: working hard, covering his teammates, but most importantly pressing and fighting for the ball, which his team did very well last season. The turk can offer that pressing ability having sufficient energy, fighting spirit and fitness level for the entire matches.

Luis Enrique maintains his ideas, the unpredictability he promised to bring in his first press conference, and the pressing aspect that had been really missed since the Pep Guardiola days.

We could say that Barça have added another magician to the squad. It will be interesting to see how Arda will link up with Jordi Alba, how will he combine with Neymar on the left flank, and if he will physically impose himself on the midfield. We will have to wait until January 2016 for answers.

Ahmed is a typical Kuwaiti Barça fan, with so much of passion for the club and football, he has fallen in love with the team since the Phillip-Cocu-as-a-captain days, even before knowing which team was that.

For him, Barcelona is not just one of the greatest things in the history of the game because of the football Barça have always played, it also means for him an even greater thing, the club's social meaning for the nation of Catalonia.

Football and its details is Ahmed's passion, and he wasn't able to find a better place other than Grup 14 to express his passion.